TOFFIA: A Land Of Fantasy. 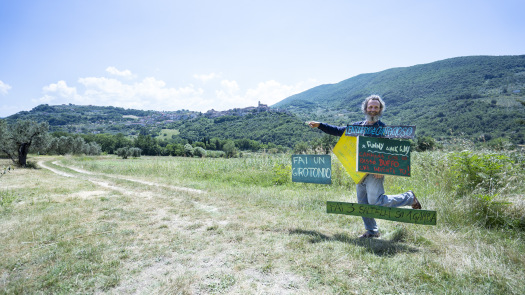 Toffia is a beautiful medieval village on top of a hill crest in an area of incredible natural beauty an hour north of Rome. Olive trees and countryside surround the village as far as the eye can see!

Toffia rises to 262 metres above sea level, on the last southern reaches of the Sabini mountains.

Numerous archaeological finds show that the area of ​​today’s Toffia was already inhabited since the Middle Bronze Age, around 1,200 years before Christ!

In 1219 Toffia was visited by Pope Honorius III, headed to Rieti; Toffia welcomed, albeit briefly, St. Francis of Assisi; in the fifteenth century San Bernardino of Siena founded the Confraternita del Gonfalone; in 1637 he obtained the abbey seminary from Pope Urban VIII, later transferred to San Salvatore Maggiore.

Since 1996 Toffia has hosted a 5 day festival characterized by a strong interest in popular culture and folk music. “Riviamo il Centro Storico”, lit “Let’s relive the old town”. As more and more people tended to live outside the city walls.
“Riviviamo il centro storico” in Toffia (RI) takes place around the middle of August with live music, performances and food. The whole community gets involved, the historic center of the village turns into a large stage filled with artists.

Just born in Toffia is a new festival for adults and children dedicated to playfulness. “Laugh and the whole world laughs with you” reads a colorful sign at the entrance of the town of Toffia, along the streets of the village, other signs invite people to play. During the three days of the Festival, workshops, happenings and collaborative and creative games dedicated to adults, children and families animated the historic center of Toffia. It is no coincidence that the Playfully Festival was held in Toffia, which in 1998 was defined, with a municipal resolution, thanks to the then mayor Silvano Ferretti, “the land of fantasy“. The Festival this year hosted 12 playful experts from Italy and abroad who proposed various workshops for the participants and involved the children and the inhabitants of the village in an atmosphere of joy, play and fun. “We managed to create, with simplicity and great care, a beautiful atmosphere in the country, which was made a pedestrian area for the occasion, thus allowing people to play with more peace of mind” said Anthony Trahair, the creator of the Festival. Then he continued: “It was a great emotion to see more than 50 children, to participate happily in the treasure hunt by the educational project”Seed in the Wood“and to rediscover what is good for adults to return to play.”

“Then we had dinner together in joy in the square accompanied by a pleasant breeze. On Friday evening the dinner was offered by Farfarina, Toffia’s organic farm that cooked delicious local products, the dinner on Saturday evening by the prolofa of Toffia saw the participation of almost 300 people and Sunday lunch by the Mr. Giacomina and Lucia gave birth to a cheerful participation of the diners “concluded Anthony Trahair. During the festival we tried as much as possibleto not use plastic plates and disposable cups and have invited people to bring home their water bottles for water. PLASTIC FREE – “Our desire is to create a Festival ” plastic-free“, because each of our actions is of fundamental importance for the care of the planet in which we live” continued Anthony. On Saturday morning Legambientethen led a walk in the historic center for adults and children dedicated to the enhancement of the country. Living playfully means cultivating a playful attitude towards life, regardless of the activity that is taking place. “For this reason we say, today more than ever, that enhancing playfulness can bring an enrichment of the quality of life of people and communities. When we talk about playfulness we immediately think of children. In these hyper-technological times even children, however, dedicate less and less time to free and spontaneous play or stop playing very soon. Then most adults do not give any importance to playfulness, with more serious consequences than we can imagine. By bringing playfulness back on the scene, rediscovering the creative and collaborative game, we develop qualities such as collaboration, trust, generosity, lateral thinking, creativity, tolerance “reiterated the creator Anthony. The Festival Playfully offered a precious opportunity to share and train playfulness, because, let’s always remember, playfulness is contagious.

THE IDEATOR – Anthony Trahair, juggler, yoga teacher for children and adults and author of the book “Pearls of Juggling“, believes in the fundamental importance of cultivating and spreading playfulness and for this he has created the Festival Giocamente. “I really believe in the potential of this Festival and I’m really happy that we managed to make it happen. It was so many people of different ages animated by the desire to play wonderful to. My desire is to continue this experience. This year the festival has been self-financed. I hope that in the next edition we will have the support of different partners “: The Playfully Festival is twinned with the renowned”Festival of playfulness Counterplay “which has been taking place since 2014 in the country of Aarhus in Denmark.

© All Rights Reserved Copyright 2021 - Giocosamente Festival
Made with ♥ by Ben