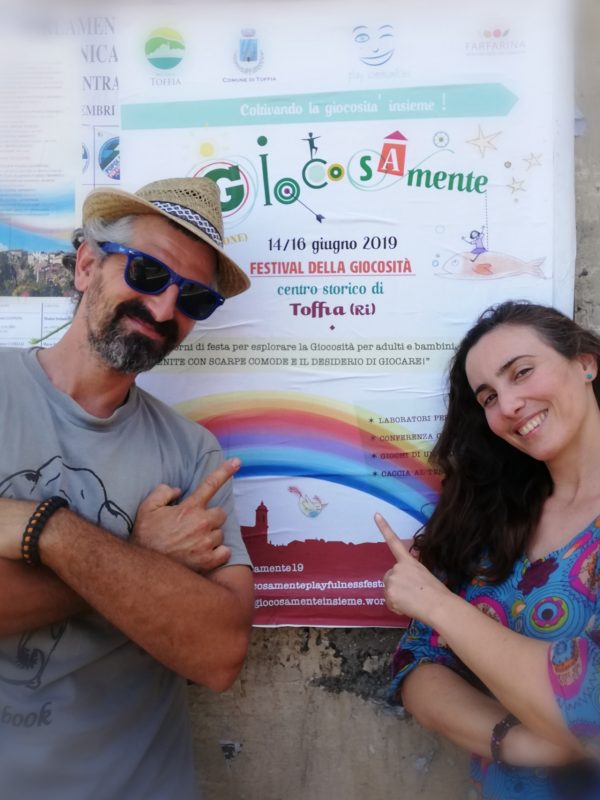 Edugioca Ludobus is the creation of  Michele De Sanctis and Aurora De Simoni –   the two founders – and  is  a van loaded with games that offers different playful contexts according to the environments, the target and the skills to stimulate.

The ludobus has been recognized by the Ministry of Education as a real traveling playroom and in Italy there is a network of about 40 Ludobus, grouped under an association called Ali per Giocare .

The project stems from a courageous intuition and the desire to find an exciting job that could respond to a need for personal and social change, through fun and respect for the environment, says Michele.

The Ludobus is a van equipped with recreational materials mainly of wood and of popular inspiration, capable of organizing play, animation and laboratory activities. EduGioca makes the game “itinerant”, allowing it to move in various situations, creating moments of relationship in different places depending on the proposals to be made and allowing a different degree of involvement. It is not structured into a show or a show, but it can be lived, played or even just observed by passersby, regardless of the place where it is proposed: in the green spaces, in the courtyards, in the alleys of an ancient village, in a main square of a country, etc. With our creations at Giocamente Festival we promote and enhance spontaneous and social outdoor play by promoting new relationships between children and their peers, parents and adults in general. In this way we aim to redevelop the urban space as a place of aggregation suitable for children and parents, allowing you to live and regain possession in a new, fun and stimulating way of public space.

In order to do this, we made playful installations in Giocoso to facilitate this process. Using natural and recycled materials, interactive structures have been created to allow anyone to immerse themselves in these games. For example, in the 2019 edition of the Festival we created a large spider web built with long bamboo canes and twine, on which bells were tied. The aim of the game was to enter the structure and go through the spider web without ringing the bells, i.e. without touching the spider web. This game positioned at the entrance of the village allowed every passerby, regardless of age, to playfully walk inside and accept the challenge in a carefree way.

Entering, touching a game, studying it, experimenting it, exposing yourself beyond your comfort zone inevitably leads you to change something about yourself and to bring out a new way to take to the square. In this case changing a thing about you like walking. After passing inside the spider web, one smiles regardless of whether one has succeeded or not; the spider web caught us in his game!

The games brought to the streets or squares of a country become real bizarre sculptures that for the days of the Festival mix with public architecture, which with an original and fresh flavor for those days a little everyone takes possession of it. Many times it has happened that the grandparents and the elderly of the country became the first actors of tales of their games, their playful memories in the country and then the enthusiasm that involves everyone is ignited.

The playful way we bring always wants to be simple and within everyone’s reach: the game for us is Freedom, Creation, Imagination, energy and sharing.

We are all waiting for you in the square for the next Giocamente Festival.

© All Rights Reserved Copyright 2023 - Giocosamente Festival
Made with ♥ by Ben